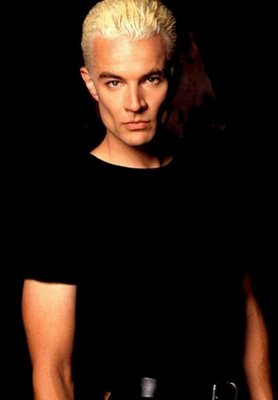 Did I mention the cheekbones?

I’ve got a confession: I’m a sucker for redemption stories. Give me your flawed, your misguided, your self-centered and your downright evil—I’ll take them, just so long as they’re stumbling along the ragged uphill path toward redemption.

Redemption tales are fantastic for character development, and they give the audience a character to really sink into and root for. For me, one of the best demonstrations of this is Spike from Buffy: The Vampire Slayer. Go ahead and laugh! But I’m not the only one who thinks so.

Why else would Spike spend 6 seasons on BtVS when he was originally supposed to take a brief evil guy role in Season 2? He was also brought back as a regular in the final season of Angel, and the Almighty Joss Whedon called Spike his most fully developed character on either show. With some easy-to-follow bullet points, I’m going to attempt to explain why his story was such a hit.

But first, here’s brief synopsis of Spike’s journey on BtVS for anyone unfamiliar. If you are familiar, or if you just don’t want to read no stinkin’ synopsis, skip down to where it says STOP SKIPPING DOWN (it eliminates about 300 words, and yes, this is a wordy post).

Spike begins as a Big Bad in Season 2, trying to kill people and being generally evil and whatnot. He has this crazy girlfriend named Drusilla, whom he loves deeply, but he strikes up an attraction to the Slayer immediately. He and Buffy interact on an I-hate-your-guts-but-in-a-funny-way for awhile, and then they reluctantly team up to stop Angelus (Endless-Love-Angel’s evil alter-ego) from destroying the world.

More hatred and evil antics until a secret government agency plants a microchip in Spike’s head so he can’t be violent against humans. Shortly thereafter, his preoccupation with Buffy turns into full-on love, albeit being pretty creepy at times.

He has some great breakthroughs in Season 5 on the fluffy-bunny level (I’m trying to make this short for you!), but then he gets in a super twisted relationship with Buffy in Season 6 that leads to him attempting to assault her*. The guilt and disgust over that drive him to get his soul back, thereby making him a person capable of seeing right from wrong according to the canon of the show.

Ultimately, Soulful Spike ends up saving the world in the blowout scene of the final season. Buffy tells him she loves him, and he dies for the cause, which completes his redemption tale. And then he’s brought back as a ghost on Angel, but let’s ignore that part for now.

Okay, so you’re caught up. Here are my bullet points on what makes Spike’s story work so well:

1. He’s the perpetual underdog. A distinction that defines Spike throughout the series is that he’s “not a monster, not a man.” Over the course of six years, he never finds a place for himself with the evil guys or the good ones. In some ways, he is the loneliest character on BtVS.

Even in the beginning when he’s full-on evil, he’s dwarfed by Angelus, who is a much badder badass. Spike is briefly bound to a wheelchair after Buffy collapses an organ on him (if that’s not love!), and Drusilla and Angelus drip with condescension as they take care of him. He later has to ask Buffy and her gang for help when he can’t feed or protect himself because of the government chip.

They promptly treat him like crap, and he spends years trying to be a part of their circle without ever being fully welcomed into it. He loves Buffy, but it’s a lost cause—he disgusts her. And even when he has a soul (which is Buffy’s Dating Vampires Rule), Angel still overshadows him, and Spike goes to his grave convinced the girl he died for will never truly love him. 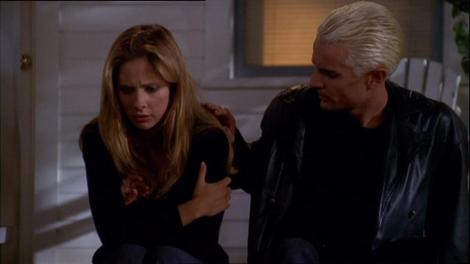 Let Spike comfort you for a moment, like he does Buffy.

2. He’s likable. Yeah he’s evil and stuff, but really? He’s so lovable. His introduction is vibrant and dynamic—he immediately sets himself apart from any other vampire we’ve seen. Spike is also one of the funnier characters on the show, and he’s disarmingly honest and perceptive. At one point, when Angel and Buffy are pretending they can be friends, he tells them in exasperation: “You’re not friends. You’ll never be friends. You’ll be in love ’til it kills you both.” Finally, someone tells them to stop fooling themselves, and that leads to:

3. He’s romantic. I used to have an unhealthy infatuation with Heathcliff from Wuthering Heights, and I always found a lot of similarities between him and Spike. Spike loves the same way: deeply and to obsession. Watch him collapse when Buffy dies in Season 5, and you see a man who cannot live without his soul. And even before Buffy, Spike was “love’s bitch” for Drusilla, so it feels natural that his redemption begins when he falls for a girl. Just like his Byronic predecessor, Spike can get pretty twisted, but love controls him. He’s fraught with it—and there has always been an allure to the darkly passionate.

4. A little bit of soul. James Marsters said in an interview circa the 90’s that he played Spike with “a little more soul than is written.” In this case, soul translates to humanity. Spike has surprising moments of love and weakness as early as his first episode. He gives the audience a glimpse of his potential, even if it comes right before ripping out someone’s throat. These moments are addictive to a redemption-loving girl like me. I couldn’t stop waiting for them to roll around—I still can’t, and that’s usually what draws your audience toward super-flawed characters like Spike. Those euphoric moments when we get to go, “Yes! I was right! There is something good in him!”

This is what getting your soul back looks like, folks. It’s painful stuff.

5. Situations that force character growth. You know how you stopped watching House three seasons in? Yeah. That’s because a bad character has to grow. Snarky and evil get boring if that’s all we ever see.

In a DVD special of some sort that I found on Youtube, BtVS writers talk about how they planned to integrate Spike into later seasons. The plot device they came up with was the chip that stopped him from hurting people. When you think about it, it’s an excellent idea.

For hundreds of years, Spike defined himself by violence. He wasn’t just interested in killing people—he loved to fight, and he was proud of his skill. So what’s the best way to force character growth? Take away the thing he uses to define himself. Take away the violence, and what do you get? A very confused—and very compelling—character. Again, Spike mourns that he’s “not a monster, not a man.” He can’t find his footing once his identity has been forcibly removed from him.

Another great way to force growth? Have him fall in love with a person who is the exact opposite of him. I’m talking North/South Poles. Penguins and polar bears. Or something more vicious, like sharks and alligators. I DON’T KNOW, BUT YOU GET IT. He falls so deeply in love and becomes so obsessed with Buffy that he’s nearly driven mad. He wants to please her, but he’s inherently evil, and she’s the greatest force of good on Earth—he can never be the kind of man she wants.

So eventually, he finds a way. He chooses to get his soul. And since the canon of BtVS says demons are evil because they don’t have souls, that makes him a character who actively changes his nature so he can be good. And then he dies to save the world from the worst apocalypse yet (after helping stave one off during his non-souled days). AND ALL FOR LOVE. Are you weeping yet? ARE YOU?

Everything on this list was a deliberate choice by the writers to make sure Spike fit with the theme of the show—and to give him a story worthy of taking up airtime for six years. These are choices you can make, too. Because there isn’t anything more interesting than watching a character struggle to be a better man, especially when he feels like he’s perpetually losing that fight.

And in the end, your character might have his love say to him, like Buffy does to Spike in the final season: “You faced the monster inside of you and you fought back. You risked everything to be a better man. And you can be. You are.”

Soulful Spike and Buffy with a case of the cuddles.

*I’m not blowing past the fact that Spike attempted to sexually assault Buffy. I hate it. In my opinion, it was the worst decision Joss & Co. ever made. They knew it wasn’t the end of Spike’s story and that they fully intended to redeem him, so their use of the topic was sloppy and tactless. My favorite character deserved more—and the viewers deserved more after five years of dedication. I will always have that thorn of frustration over what drove him to get his soul in the first place, but I still find his story, overall, one of the most compelling redemption tales out there.

2 responses to “What can I tell you, baby? I’ve always been bad.”

New Girls in the Pub

We're two girls new to the biz who blogs about publishing, writing and all things books.

First Line of the Day